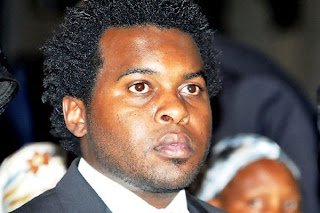 Son of the late internal security minister Prof. George Saitoti, Zachary Saitoti together with a business partner, Jeff Kegeri, last night launched an online fashion magazine dubbed ‘Watch This Space’.
The magazine is under the parent company ‘Cranium Ink’, which was also launched last night.
‘Watch This Space’ is a magazine that will highlight fashion and design in Kenya. Its launch edition will feature 9 fashion houses, including one owned by Citizen TV news anchor, Janet Mbugua.
Jeff is a creative designer while Zack is a photographer and graphic designer. He has many years of experience with some of his works featured in publications such as Trap Magazine and Weapon of Choice. Some of his clients over the years include ITV and the BBC.
Locally, Zachary has remained largely unknown until he appeared on TV during the burial of his father, the late George Saitoti. He recently came back to the spotlight after a Subukia family went to court claiming that he is their long lost son. They claimed that Zack was kidnapped when he was still a child, and went to live with the vice president’s family.
© nairobiwire.com
How To Know You Are Cursed: Part 2 < Previous
Olive Mugenda Sh 400 Million Corruption And The Kenyatta Family Link Next >
Recommended stories you may like: