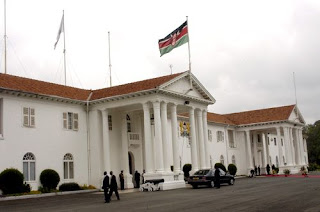 Visiting South African singer Zonke, was on Friday the star attraction at the Tusker Light Concert held at the Arboretum Grounds.
The concert was however under constant threat of shut down, following complains by State House, which is not far from the venue. GSU officers sent by State House threatened to discontinue the concert citing too much noise.
Eddy Gray had just finished performing when tens of GSU officers announced their entry. For some minutes, the sound system was shut down to the dismay of the revelers. Organizers had a hard time convincing the officers that loud music and concerts go hand in hand. They however left after being shown the licenses and permits. Most revelers were quick to ‘see’ Lucy’s hand.
Moral of the story: Organize your concerts very far from State House, the president and first lady need some rest.
© nairobiwire.com
Gangnam Style Dethrones Justin Bieber To Be YouTube’s Most Watched Video < Previous
10 Things To Do When Stuck In A Traffic Jam In A Matatu Next >
Recommended stories you may like: