Presidential Debate Postponed As Julie Gichuru Is Dropped As Moderator 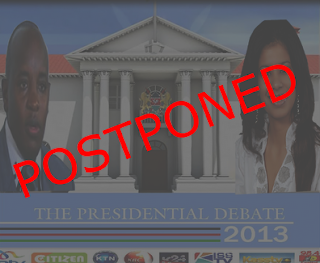 The much publicized Presidential Debate have been postponed from late November until some time next year. The first in a series of 3 debates was to take place on November 26th and would have seen a total of 8 TV stations and 32 radio stations air it simultaneously. The second was to be held on 14th January 2013, with the third on 11th February.
Royal Media’s Wachira Waruru, who is the chair of the joint steering committee, said that the date was changed after comprehensive consultations. “The decision to move the debates follows consultations with stakeholders who felt that it would be in the wider interest of the public to stage the presidential debate closer to the March 2013 general election, and indeed after the formal nomination of presidential candidates has taken place.” he said.
There had been uproar over the previous dates from those involved, after it emerged that the media had set them without consulting any candidate on their suitability. Issues raised included timeline of party nominations, preparations of manifestos, pre-election coalitions that would have excluded some candidates from the debate, among others.
Another arrangement that was believed to be troubling some parties was the pre-determined debate moderators. NTV’s Linus Kaikai and Citizen’s Julie Gichuru were handed that job, and have since been widely attacked as being either partisan or ineffective, judged on previous high profile assignments. When Linus Kaikai got a chance to interview, Uganda president Yoweri Museveni some time back, many people were not impressed by his performance. The same case happened to Julie, when she hosted Uhuru on Sunday Live. She looked clearly unsettled or intimidated, with some people commenting that ‘Uhuru was interviewing Julie’.
Though there is still no official communication on the fate of the two moderators, word has it that they have been dropped and all parties will be involved in the process of selecting new ones.
© nairobiwire.com
Silvio Berlusconi Escapes To Malindi Before Serving Jail Term < Previous
President Kibaki Writing His Memoir ? Next >
Recommended stories you may like: