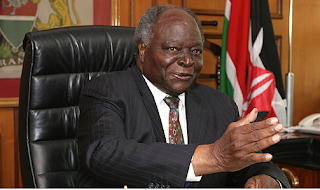 The grape vine is buzzing with the news that President Mwai Kibaki is currently busy writing his memoirs that according to sources are yet to be given a title.

A source has even gone so far as to say that the president is ‘burning the midnight oil’ on the book (a definite bestseller) and is working closely with an as yet unnamed ‘ghost writer’ who is putting extra polish on Mzee’s usually muddled pronouncements.
Beside shedding light on his rise from a shoeless scholar in Othaya to the dizzying heights of the London School of economics, the book is also expected to set the record straight on the dark days of the post election violence in 2007/2008 an episode that has already been written about by Miguna Miguna (Peeling back the mask) and former UN Sec Gen Koffi Annan (Interventions: a life in war and peace).
The president’s memoir is however not expected to dwell too long on topics like his alleged second wife (Mary Wambui) and the Anglo leasing scandal.
If confirmed, Kibaki’s memoir will add to the list of autobiographies written by the country’s political elite. Among the memoirs that have so far been released by political leaders is Njenga Karume’ s ‘From Charcoal to gold’  and Joe Hamisi’s ‘The politics of betrayal’
d-post
Presidential Debate Postponed As Julie Gichuru Is Dropped As Moderator < Previous
M Pesa Signs Shirt Sponsorship Deal With Manchester United… and other silly stories this week Next >
Recommended stories you may like: