Mohammed Ali: Why I Left That Station NTV

“The bosses kept on postponing airing the story to a point where it looked like they would kill it.” Mohammed Ali 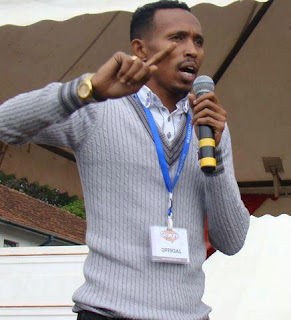 Its no longer news that Kenya’s best investigative journalist Mohammed Ali resigned from NTV after less than 4 months. It is also no longer news that he went back to his former employer KTN. However, it has remained a matter of speculation why Moha left NTV in such a hurry.
The reporter has now come out and given reasons.
In an interview with Expression Today magazine, Moha says that NTV does not take investigative work seriously and senior management are boot lickers who will not ‘blink’ when killing a story, because it upsets some of their masters. To support this, he cited his last piece at the station,”Msaragambo wa Ardhi” in which he shed light on the mystery surrounding the murder of a driver, who met his death after his boss’ car was burnt by unknown assailants in Parklands area.
He said that the original story was trimmed down by almost half an hour, from 55 minutes to just 30 minutes. Crucial scenes that targeted powerful individuals were in the process removed.
Moha stated that the version that was aired put his credibility in doubts, as informants would no longer trust him. “When bosses edit and end up distorting your story in that manner, you risk losing your credibility especially with sources that risk their lives to give you information. Next time you seek information from such sources, they would not cooperate because they think you are a fraud. I therefore concluded that NTV was not a safe place for me to continue with serious investigative journalism because the regime there would not allow it.” he told ET.

“I did not agree with the way the story was edited to the point of self-censorship. We had done a good and watertight piece but the editorial chiefs ruined it. Worst of all, we had disagreed with the bosses on several occasions on when the story should have gone on air. The bosses kept on postponing airing the story to a point where it looked like they would kill it. It was finally aired when I was out of the country and when I looked at the version aired, I was shocked at how the editing had distorted the story. I was even ashamed of having my byline on it,” he added.
He says that he made the decision to quit NTV while on the investigative journalism seminar in South Africa. “I returned on November 4 and handed in my resignation on Monday, November 5.”
© nairobiwire.com
Tactless Kalonzo Tells His ‘Last Hope’ Raila To Retire < Previous
Mbusi: I Have Not Resigned From Ghetto Radio Next >
Recommended stories you may like: