Does Kalonzo Have Any Game Plan? 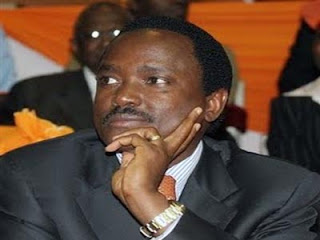 In what may see him go down as the most tactless politician, Vice President Kalonzo Musyoka has hit out at the person many believe to be his last hope for survival, Raila Odinga.
The VP yesterday told Raila to join Kibaki in retirement next year. He said this is the only way Kenyans will have a chance of electing new leaders, who will develop the country further.
“He should consider taking a break from politics and let young and determined leaders to take over from where they have left,” said Mr Musyoka during a rally at Nabongo grounds in Mumias town. He added that the Prime minister’s post was not even constitutional prior to the last general elections, and was only ‘sneaked’ in to accommodate a coalition government and that it has now been completely scrapped off.
The VP said that he will work with Musalia Mudavadi “..and capitalise on the vast leadership experience I have and give Kenya the best leadership.”
Talk has been rife that Kalonzo is to be Raila’s running mate, especially after Kang’undo MP Johnstone Muthama publicly stated that the two would partner. Mutula Kilonzo also added his voice, laughing off claims that G7 was once again courting Kalonzo in hope that he doesn’t team up with Raila.
Many analysts believe that Uhuru-Ruto meeting Raila-Kalonzo in the ballot would be one complicated ‘fixture’, capable of producing any winner, and it is believed that Raila has been working overtime to make this work, after failing to convince Ruto to join him.
Kalonzo’s lieutenants have meanwhile been sending mixed signals, with some preferring to work with Mudavadi while others prefer Raila. Kalonzo has however been leaning towards the former, where his chances of leading the ticket is high.
It is believed that the VP still thinks he will be president in 2013, despite things looking not so good. His best shot at the presidency will come when he convinces Mudavadi to be his running mate. Then, he may improve from his previous trial and emerge number two, but as things stand as of now, not better than that. Convincing Mudavadi to be his running mate may however turn out to be mission impossible, considering that he left ODM where he was assured of a similar position.
Kalonzo accepting to be Mudavadi’s running mate is out of the question.
If the VP goes back to G7, he’ll be in contention for the majority leader seat, and nothing more than that. The president and running mate position are already filled.
If he joins Raila, he’ll be assured of the running mate position and nothing more than that. Still, this ticket will be a gamble considering the voting power Uhuru’s and Ruto’s communities possess, and where Mudavadi will stand. However, this is emerging as his only viable route to a senior government position next year.
So, when he publicly attacks Raila just days to the submission of pre-election pacts, one wonders whether Kalonzo knows what he’s doing.
© nairobiwire.com
Singer Amani Allegedly Spotted In Uganda With A Married Man < Previous
Mohammed Ali: Why I Left That Station NTV Next >
Recommended stories you may like: