NTV Fights To Keep John Allan Namu Away From KTN 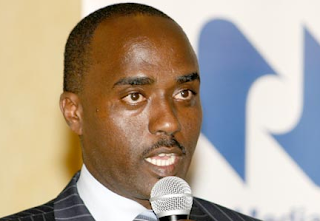 Rumours of John Allan Namu’s departure from NTV have been flying for quite some time. The investigative journalist is believed to be on his way out of Nation Media Group, heading to his old employer along Mombasa road. His colleague Mohammed Ali, went that road last week, after he handed NTV his resignation letter. On Monday night, the Swahili journalist known for his investigative piece, ‘Jicho Pevu’, just came short of confirming that Namu will be joining him at KTN, through his twitter handle.
Having failed to prevent Moha from leaving, NTV has decided to act, facing another eminent departure by a top reporter. It has been reported that NMG’s CEO, Linus Gitahi, over the weekend took three journalist believed to be on their way out of the twin towers, for a ‘retreat’ at Nyeri’s Outspan Hotel. The three, Joe Ageyo, John Allan Namu and Linda Ogutu are all believed to be on KTN’s radar, with Standard Group’s CEO Sam Shollei having offered them irresistible pay hikes should they go to KTN.
Reportedly, Linus Gitahi offered to significantly increase their pay, urging them to remain at the station, since it needed them during this time of elections.
It is not clear what decision the three made, but Gitahi’s move might have worked, at least temporarily, since no movement has been reported since.
[Credits: Jackal News]
© nairobiwire.com
Syokimau Railway Station In Pictures < Previous
Argentina Club Signs Messi’s Two Weeks Old Son For Undisclosed Amount Next >
Recommended stories you may like: