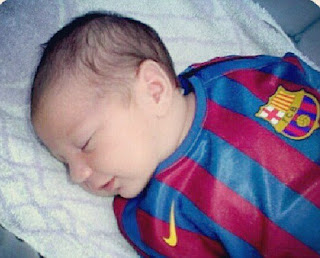 World’s best footballer, Lionel Messi’s baby is just two weeks old, but he has already signed for a football club! Can you beat that?
Argentina outfit Newell’s where Messi played at youth level before joining Barcelona have snapped up the son of the man widely believed to be a football god, Thiago as a member; gods begat gods, they believe, and they took a step before someone else snaps up the ‘new god’.
Newell’s will be hoping their decision to beat the competition early pays off by Messi’s powers of soccer genius passing down through his genes to the little lad.
Baby Thiago, who was signed by his grandfather, is eight years younger than when his dad joined them in 1995.
The small ‘football god’ was born on November 2 which is one part of a bizarre riddle involving the current two best players in the world who have been on each other’s neck for honours; Real Madrid ace Cristiano Ronaldo is 869 days older than his great rival Messi.
But unbelievably true, Ronaldo’s son Cristiano Ronaldo Junior is also 869 days older than Messi’s son.
Messi has now broken almost all records possible and he remains the fans’ favourite for the next Balon d’or. As great and talented a player Cristiano Ronaldo is, it is rather unfortunate that he is also in the spotlight in the Messi era. If not for Messi, Ronaldo deserved to have won several personal honours.
To end arguments on comparison of the two greatest players living now, most people conclude on this; ‘Messi is a god, Ronaldo is human. They are both great footballers, but you still can’t compare a god to a man.’
Churchill Heads To UK Amid Confusion Over Return of Churchill Live < Previous
Porn Websites Among The Most Visited In Islamic Countries Next >
Recommended stories you may like: