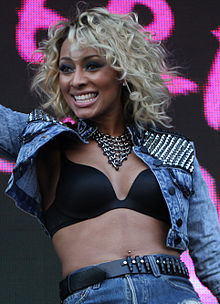 Keri Hilson has often been the target of false promoters, who claim to have secured her signature to perform in the country. Last year, it had been alleged that the singer would be gracing the Tusker All Stars mega concert, alongside Usher. Those reports however turned out to be false when she replied to a fans query on Twitter. She wrote, ” I will one day, but nothing’s scheduled.. boOOo the false promoters”
Using the same medium she denied the reports then, Keri Hilson has confirmed that she will be performing in the country this December. Replying to a fan’s question on when she’ll be performing in Tanzania, the ‘Pretty Girl Rock’ singer said that she’ll be in East Africa this December, with Kenya and Tanzania on the list. This was her tweet.

No more details have been forwarded by either the artiste or the promoters.
© nairobiwire.com
Sofapaka Free Kick Blasts Past The Net Leaving A ‘Gaping Hole’ < Previous
Nairobi Half Life Leads in Kalasha Awards Nominations Next >
Recommended stories you may like: