Kenya To Manufacture Its Own Armoured Military Vehicles 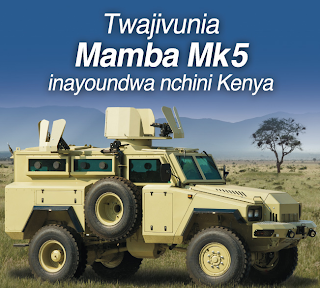 Osprea Logistics, a UK based military hardware manufacturer, has started construction of a Sh 3.5 billion plant in Mombasa, that will assemble amoured cars and military personnel carriers. This will be the first armoured vehicle manufacturer in the region, with the other being in South Africa.
The armoured personnel carrier christened ‘Mamba’ is mostly used by the African Union peacekeepers, and private security contractors around the world. Last year, US department of state bought 22 of them for AU troops in Somalia.
Osprea plans to make at least 100 units of Mamba during the first year of production, finally peaking at 30 monthly. Each unit will go for Sh 25 million.This, they say will translate to about 200 direct jobs.
Salih Brandt, the chairman of Osprea Logistics, said that Kenya was chosen because of its strategic geographic location. “Kenya is strategically located and offers great access to the rest of Africa compared to South Africa where Osprera’s other manufacturing plant is.”
Mamba can carry a total of 10 passengers, plus the driver. It is designed to withstand land mines and other large IEDs, as well as small fire arms.
© nairobiwire.com
"Saitoti Stole My Son 24 Years Ago And Called Him Zachary" Man Claims < Previous
Detailed Syokimau Train And Parking Charges Next >
Recommended stories you may like: