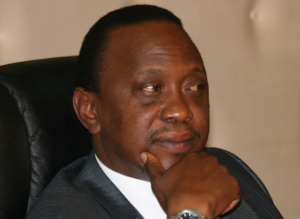 Uhuru Kenyatta has not been included in this year’s Forbes 40 Richest Africans list. The deputy prime minister was last year listed at number 26 on the list, with a net worth of $ 500 million, with land given as the main source of the wealth.

This was the description Forbes gave then.

Last year’s list was compiled in consultation with journalist Larry Madowo, who came under attack for what people believed was misleading the magazine that Uhuru owned all of Kenyatta family assets. This year, Forbes looked for an alternative source of information, and they settled on ‘Who Owns Kenya’ presenter Julie Gichuru.
This year, they’ve made a complete turnaround by dropping off Uhuru Kenyatta from the list, for reasons that they are not sure what is his and what is his family’s. This is what they wrote.

Uhuru Kenyatta, Kenya
Source of wealth: Land
The son of Kenya’s first president, Mzee Jomo Kenyatta is a heir to some of the largest land holdings in Kenya. The Kenyatta family of which he is a key member, owns over 500,000 acres of prime Kenyan land, along with other assets such as a stake in the Commercial Bank of Africa, a dairy company and a television station. He dropped off due to uncertainty over who in his family is the chief custodian of the vast land holdings.

Manu Chandaria has also not been included in the list because his, is a family business, believed to be owned by several family members. Chris Kirubi who was number 31 last year, failed to meet the cut this year.  Naushad Merali, the businessman behind Sameer Group of company is the only Kenyan listed, effectively making him the richest Kenyan, according to Forbes.
Below is the full list of Africa’s 40 Riches People in 2012.
© nairobiwire.com
Forbes Names SK Macharia ‘Man To Watch’ In 2013 < Previous
Hate Speech Musician Muigai wa Njoroge Elected TNA Chairman Next >
Recommended stories you may like: