Churchill Heads To UK Amid Confusion Over Return of Churchill Live 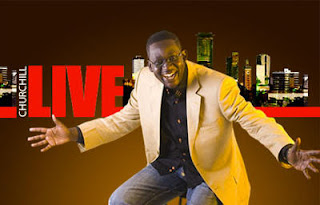 Radio presenter and comedian Dan Ndambuki, best known as Churchill, will be in the UK this weekend during the launch of a mobile money transfer by Baclays Bank of Kenya.
Churchill will be giving two stand up perfomances on Friday 17 and Saturday 18th November, at Coventry’s Britannia Hotel and Hotel Inn Kensington respectively. The event is dubbed Barclays-Kenya PingIt launch, and is set to cash in on diaspora remittances. The service will be competing with Nation Hela, a service launched by Nation Media Group and Diamond Trust Bank.
Churchill has cemented his role as Kenya’s preferred comedian and MC, especially by the high budget corporates. It all started after he hosted what was probably Kenya’s most successful and most watched comedy show, Churchill Live. The show aired for 3 seasons, attracting the who’s who in Kenya on its set, but its return has only been a matter of speculation. NTV has often wrongly reported on its come back, at one time claiming that it would be back ‘This August’, only for the month to end without any communication. There has been several unconfirmed reports of wrangles in its production team, including a pull out by Eric Omondi.
As of now, it is not known if the show will ever find its way back to your TV, and whether it has seen its better days should it come back.
© nairobiwire.com
Syokimau Railway Station In Pictures < Previous
Argentina Club Signs Messi’s Two Weeks Old Son For Undisclosed Amount Next >
Recommended stories you may like: