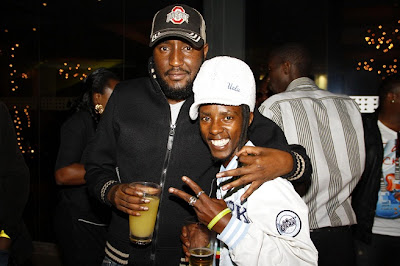 They are probably the two most listened to afternoon radio presenters in Kenya. Listeners are split in the middle as to who is better than the other. Their fans will give you reason after reason why Shaffie is better than Mbusi or why Mbusi beats Shaffie hands down.
Mbusi, who started his career at Ghetto Radio as a messenger, is newer in the radio scene than Shaffie. The former hosts ‘Goteana’ together with Bonoko while Shaffie co-presents ‘Rush Hour’ with Kalekye Mumo. Unlike Shaffie, Mbusi appeals to the sufferers, as he himself calls them, through his heavy sheng. The pint size presenter naturally connects with the lower class (economic), listeners, especially though the ‘Nyahunyo’ segment,  while Shaffie is mostly liked by the middle to high class.
During this year’s CHAT awards held at the Nyayo Stadium, the battle for the Radio presenter of the year was a two horse race. Shaffie eventually won, but lots of people thought Mbusi was the rightful winner. Nyayo Stadium was literally divided into two when the Kiss 100 presenter was announced the winner. At that time, he was on his way to the venue, but on receiving information of how his name had brought chaos, he turned around.
Mbusi was not happy with losing. He took to Facebook to slam Shaffie, with a status update that generated close to 4000 comments. He wrote, “Shaffie is so fake, am surprised he wasn’t made in China,”
Mbusi also believes Shaffie copied his idea of ‘Nyahunyo’ (whipping of public offenders). “You see, Shaffie copied my idea. Amependa kudub vitu sana,” he once said.
Mbusi was just recently in another beef with Raptcha and the genesis was again, Shaffie. Raptcha who is a family friend to Shaffie came out gun blazing to defend him against constant attacks from Mbusi. The attacks went personal and THIS POST can refresh your memory.
Last week, Shaffie posted the above undated photo on his Facebook page and soon made it his cover picture. With our country witnessing alliances right, left and centre, maybe this is a sign of things to come.
© nairobiwire.com
Disastrous Economic Implications of An Uhuru – Ruto Presidency < Previous
Why Kenyan Ladies End Up Single For Life Next >
Recommended stories you may like: