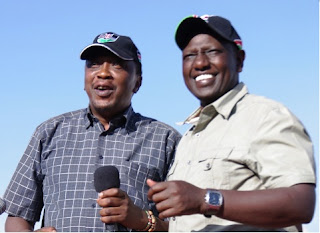 As elections approach, Kenyans will need to decide whether they will vote using their heads or their hearts, particularly in relation to the bids of Mr Uhuru Kenyatta and Mr William Ruto, both of whom have been indicted by the International Criminal Court over crimes committed before and after the last election in 2007.
Regardless of whether Mr Kenyatta and Mr Ruto are innocent, and notwithstanding their support in their ethnic strongholds, we as a nation have to soberly and rationally consider what an Uhuru or Ruto presidency will mean for Kenya.
As Kofi Annan, the African Union envoy who mediated the 2008 peace deal, said recently, if an ICC suspect assumes the presidency in the next election, the consequences for Kenya could be disastrous politically and economically. Here’s why:

1. Kenya could be labelled a pariah state by the international community. This will mean that donors will withdraw their moral and financial support to Kenya. Donor-funded long- and medium-term plans and projects, such as Vision 2030, will be shelved. Poverty levels will rise. Economic growth rates will decline. Kenya will not attain middle income status by 2030.
2. Western nations may impose a trade embargo on Kenya. The African Union, which backed the peace process, may press upon its members to impose sanctions on Kenya. Kenya’s coveted membership in the East African Community might also be threatened.
Domestic revenues may see Kenya through, but without trading partners, revenue from exports will fall, leading to further hardships. Just ask the Cubans what the 50-year US trade embargo has done to their economy and you will see why this scenario is not desirable.
3. The United Nations may pull out of Kenya and set up base in a neighbouring country, thereby severely affecting the local economy. Revenue gained from UN conferences, contracts and projects will disappear. If the UN leaves, Kenya will lose millions of dollars that pass through the country’s banks. Nairobi’s housing and retail markets that cater for UN staff will collapse.
4. Like Zimbabweans under Robert Mugabe, Kenyans will start seeking refuge and jobs in neighbouring countries. Kenya will be viewed as a failed state like Somalia, generating the large numbers of refugees and IDPs.
Western countries will start to impose harsher travel restrictions on Kenyans. Middle and upper class Kenyans who can afford to travel and send their children abroad for further studies may be particularly affected.
5. If Uhuru and Ruto do not appear at their own trials, they will not be able to represent Kenya at international forums. Their travel will be restricted to countries that promise not to hand them over to the ICC.
They, in turn, may decide to follow the path of isolationism by breaking all international agreements that Kenya is signatory to. 6. If Ruto and Uhuru attend their trials, and even if they are found innocent, they will have to spend a considerable amount of their time at The Hague.
Kenya will suffer from an absentee leadership. Anarchy might ensue. Regional warlords may take advantage of the situation and break up the country into fiefdoms. Jealous neighbours may also use the leadership vacuum to gain economic and political supremacy in the region.
7. If found guilty, Uhuru and Ruto will face a Nixonian moment: resign or be impeached by the National Assembly,” says Tom Maliti of the ICC Kenya Monitor blog. “At the ICC level, the men will go into detention as the court searches for a country to hold them in prison for the duration of whatever sentence is handed down.”
Like most Kenyans, I wish we didn’t have to consider these scenarios. But we do, unfortunately, because we stand to lose everything we have worked for in the last 50 years if we make the wrong choices at the ballot box next year, and if we allow ethnic affiliation, rather than national interest, to determine our vote.
If we want impunity to end, maybe we should lock out everyone who was part of the current coalition government, and vote in a fresh, visionary, untainted candidate.
[email protected]

James Mwangi Leads Forbes Person of The Year Nominees < Previous
Shaffie Weru And Mbusi Officially End Their Beef. Next >
Recommended stories you may like: