William Ruto: I’ve Not Been Admitted In Hospital 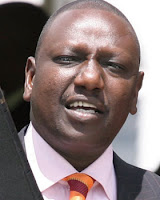 Eldoret North MP William Ruto yesterday denied reports carried on several blogs that he was admitted at a Nairobi Hospital. Through his social media accounts, Ruto assured the public that he was healthy and urged those spreading the rumour to be responsible in their writing.
Blogger Dennis ole Itumbi had tweeted that his ‘get well’ message to Ruto, but the latter denied being sick. He said he had read of his alleged sickness from the blog Kenyan daily post and from a tweet from ‘one Ole Itumbi’.  He added that he left the country on Sunday night for a 4 day overseas business trip in a very healthy state.

I have seen a post on the Kenyan Daily Post as well as a tweet from @ole Itumbi saying that I have been admitted to hospital. That is untrue
— William Samoei Ruto (@WilliamsRuto) September 25, 2012

© nairobiwire.com
Kalembe Ndile’s Hilarious Letter To Bill Gates < Previous
Find Little Tania And Get A Million Next >
Recommended stories you may like: