Find Little Tania And Get A Million 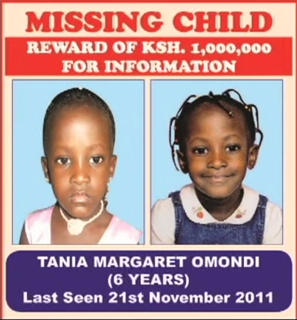 Tania Margaret Omondi went missing on 21st Nov 2011, causing untold agony to her family. The 5 year old’s case turned out to be kidnap after the parents were contacted with a Sh 2 million ransom demand. Despite the family making it known to the kidnappers that they were not in the range of millions, they went ahead and looked for the funds, sending bit by bit. In the month of February, the police made some arrests and around the same time, communication between the family and the supposed kidnappers went silent.
Its now been over 10 months since the kidnap and the family has not tired looking for their daughter. They have managed to raise Sh 1 million as a reward for anyone with information of the whereabouts of Tania. They have also launched a massive social media campaign with both a Facebook page and a Twitter handle.
If you have any information that may be of help, you may reach the family through the following contacts.
www.facebook.com/FindTania
https://twitter.com/FindTania
Phone: 0707 234006
Email: [email protected]
© nairobiwire.com
William Ruto: I’ve Not Been Admitted In Hospital < Previous
Waititu Makes Grand Escape From Parliament Next >
Recommended stories you may like: