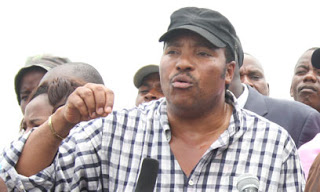 Embakasi MP Ferdinand Waititu yesterday came under fire after he was caught on tape inciting Kayole residents to evict members of a particular community from the area. Waititu’s statement though only targeting the Maasai security guards, was largely interpreted to be hate speech against the entire community.

The controversial MP told a charged crowd that ‘all those Maasai were not welcome in Kayole’, amid cheers. He then went ahead to claim that some of those Maasai’s are thieves without ID cards. He then urged the area OCPD, who was standing right next to him, to take action against the ‘Maasais’ who had killed a young man from the area. He continued to tell him to arrest all Maasai in the area so that they could explain who had committed the act.
If Mzalendo Kibunjia finds reason to take him to court, Waititu will join the growing list of individuals battling incitement and hate speech charges. Chirau Ali Mwakwere was recently in a similar position, before his public apology that let him off the hook.
Below is Waititu’s video.
(If your browser does not support video, try our desktop version)
© nairobiwire.com
Siku Njema Author Ken Walibora Arrested For Exposing His Genitals < Previous
KBC On The Brink of Total Shut Down Next >
Recommended stories you may like: