KBC On The Brink of Total Shut Down 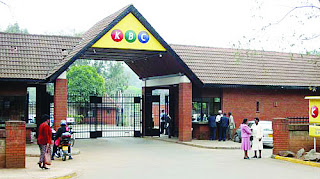 Kenya Broadcasting Corporation, KBC could find itself shutting down if nothing is done to help its current monetary situation. The national broadcaster needs an estimated Sh 4 billion to continue broadcasting. Of this, about Sh 1.5 billion is meant to pay up its debt.
Through the Minister of Information and Communication, KBC is seeking government intervention in this do or die situation. Its state is so bad that it is struggles to fund its recurrent expenditure, like payment of salaries. It has also consistently been unable to meet its operating costs, like water and power bills. In the last financial year, Nation is reporting that its budget had a deficit of Sh 2.3 billion.
Its monthly power bill amounts to about Sh 34 million, mainly brought about by its obsolete equipment.
In the past decade, KBC has lost various revenue sources, with the most pronounced being advertisement revenue, now enjoyed by entrants like NTV and Citizen. When Kibaki took over power in 2003, radio and TV permits were terminated hence denying the state broadcaster another source of income.
Currently KBC owes KRA Sh 452 million, programme suppliers Sh 137 million, KBC staff pension scheme Sh 458 million and the City Council of Nairobi Sh 522 million.
Its over 1000 staff number is considered bloated and the information ministry on behalf of KBC is asking the government to cover the cost of letting some of the staff go. The wage bill takes over 50% of the annual income, with the situation being made worse by the recent pay rise given to striking workers.
© nairobiwire.com
Waititu In Trouble Over Maasai Hate Speech Comment < Previous
Wilson Sossion For President Next >
Recommended stories you may like: