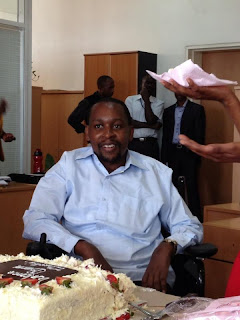 NTV reporter, Richard Chacha is recovering well and may soon get back to work, though not in the field. The reporter was earlier this year involved in a road accident in the company of: Linus Kaikai, Emmanuel Taalam, Ephantus Mwangi and Frida Kirema. They were headed to a fundraiser in Kaikai’s hometown of Kilgoris, when their vehicle rolled near Mai Mahiu.
Richard Chacha sustained the most serious injury and was airlifted to Nairobi, where he was admitted in ICU. He has continued to receive medical attention, including a recent visit to a specialized hospital in India.
His colleagues at Nation House threw him a welcome back party and he was in a jovial mood, not letting his wheelchair steal the moment from him.
We wish him continued recovery.
© nairobiwire.com
Waititu Makes Grand Escape From Parliament < Previous
Akon To Perform In Nairobi Twice This October Next >
Recommended stories you may like: