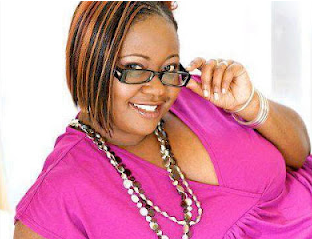 Barely a month since joining Facebook, Kiss 100 Rush Hour presenter, Kalekye Mumo has already started receiving weird inbox messages. Apparently someone has been expressing his deepest feelings to the plus size presenter, and she’s not one to keep a secret.

Last week, she told her fans of this person who had been expressing his love for her, and she jokingly admitted ‘entering the box’.
This is what she wrote.

“somebody inboxed me that in his dreams am his but in real life am his dream.. aki ya mungu naingia box”

That was soon followed by another one.

he is still inboxing me this »» I never thought of loving someone like u…But when I saw you and as I laid my eyes on you, I can’t help myself but falling in love with you.. kalekye mumo is now engaged.. box pap

Since Wednesday, we’ve been waiting to hear from Kalekye, if the mystery man proposed, and what her response was, but unfortunately nothing yet.
The presenter has joined the long list of celebrities who have to put up with tens of messages daily, from very adoring fans to the absolutely irritating ones. Caroline Mutoko has had to contend with many days of unmeasured insults on her wall. Internationally, several celebrities have had altercations with their fans, especially on twitter. Rihanna has been on this route severally.
© nairobiwire.com

Zack of ‘Bring Zack Back Home’ Admitted In Hospital < Previous
Jose Chameleone Misbehaves In Nairobi Next >
Recommended stories you may like: