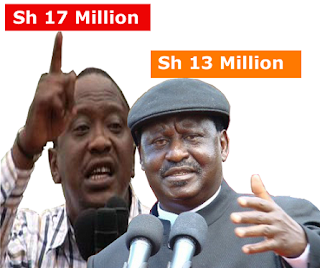 The much hyped political campaigns have now proved to be more expensive than was expected it can now be revealed.
With only less than 7 months just before the country goes into the much awaited general elections under the new constitutional dispensation, political parties have resorted to dig deep into their pockets to woo voters.
According to senior staff in various parties who spoke on condition of anonymity, political parties have developed a weekly expenditure plan which helps in running their campaigns.
“In a week which ends up with a 3 day rally with approximately 30 Mps on campaign together with part of their secretariat and a few members brought on board to help ends meet, not less than 15 million is spent per week,” said one source.
When we toured and collected secret information regarding the campaign trails of various presidential aspirants, we found more than what could meet the eye.
“We go as far as fueling for legislators, meet their air ticket expenses in case we are to fly out of Nairobi, pay their accommodation fee and pay them handouts which they later dish out to campaign rally multitudes to prove their might.
They also part with entertainment allowances as most of the legislators love partying after a tiresome rally day and engage in a drinking spree. “Just imagine the financial muscle top presidential candidates Uhuru Kenyatta (TNA) and Raila Odinga (ODM) have?” revealed a source seated at The National Alliance
The source further stated that the minimum amount they can spend for fueling one Mps’ vehicle is ksh.25, 000; an air ticket goes for approximately ksh.30,000 per person whereas accommodation cost is ksh.50, 000.
It was also revealed that the least the secretariat pays an mp as handout, which is meant for wooing individuals to join their respective parties is Ksh.100,000. Together with the ‘entertainment fee’ an mp takes home not less than ksh.150,000. Sources close to Nairobi’s most vocal MPs Ferdinand Waititu and Mike Mbuvi aka Sonko revealed that the two enjoy free existence to the extent of having their expenses in Nairobi paid for by their preffered presidential candidate.
The table showing the expenditure was arrived at after finding vital supportive documents showing how political parties flex their muscles and making sure that only the few are holding other Kenyans at ransom by transacting in large volumes of cash while the rest strive to make ends meet.
The figures are exceptional to young political parties. Like in the case of Party of Action whose presidential candidate Raphael Tuju is said to be coughing out large sums of money and is rated to be using an amount in between that of Kalonzo Musyoka and Martha Karua. Others like DP’s Rev.
Mutava Musyimi and Roots Party’s Prof. George Wajackoyah are also said to be dishing out cash whenever they meet the electorate.
Kenyans are pensively waiting to see whoever will become Kenya’s fourth  president regardless of how much money is dished out in exchange of vote favours. Whilst it is illegal to bribe voters, this trend continues as ‘hungry’ Kenyans receive handouts from the political bigwigs.
By Truth Newspaper
Editing by nairobiwire.com
Miguna Given Hero’s Welcome In Nyeri < Previous
Michelle Morgan: The New Citizen TV Presenter Everyone Is Talking About. Next >
Recommended stories you may like:

Wajackoyah To Hold Fundraiser For Kenya’s Debt If Elected President

DP Ruto Tips Kindiki To Succeed Him in 2032