Miguna Given Hero’s Welcome In Nyeri 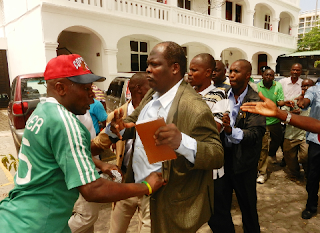 Former adviser to the Prime Minister, Miguna Miguna yesterday took his book promotion tour to Nyeri and unlike other towns, he was given a hero’s welcome. Coming straight from a hostile Mombasa tour where he suffered the wrath of a hooligan clad in a ‘DESTROYER’ Gor Mahia T shirt and famously losing one shoe and his trademark cap, Miguna had the last laugh after Nyeri residents received him warmly.
Hundreds lined up on streets to see this man and several of them were heard telling him “Karibu Nyumbani”, swahili for welcome home.
When time to promote his book came, Miguna continued with his Raila bashing to the constant applause and laughter by the audience, believed to be mostly Pro-Uhuru. He accused Raila of being behind the mobs that have been attacking him anytime he is promoting his book. He added that he knew who had paid his Mombasa attackers. He heaped praise on Nyeri residents for not attacking him, showing that they were tolerant. Asked why his tours were all about Raila yet even Kibaki was mentioned unfavourably, Miguna said that it was Raila who was tormenting him and not Kibaki.
© nairobiwire.com
The Trials And Tribulations of George ‘Blackberry’ Odhiambo < Previous
Uhuru Kenyatta Spending Sh 17 Million Every Weekend On Rallies Next >
Recommended stories you may like: