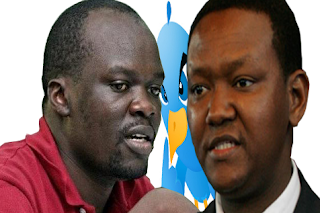 Yesterday, Twitter users experienced a period of unusual inactivity after ‘tweep in chief ‘, Robert Alai spent part of the day and the whole night at the Kilimani police station. Alai was arrested after claiming that government spokesman Alfred Mutua wanted to kill him, the way he killed human rights activists, Oscar King’ara and Paul Oulu.

Last week, the controversial blogger unleashed a string of tweets in defense of Karen Kandie, a woman allegedly assaulted by Shelter Afrique managing director, Allassan Ba. The tweets that got him into trouble with the government spokesman are:

Alai was arrested when he presented himself to record a statement at CID offices in Nairobi. Reportedly, the police had received a complaint from Alfred Mutua and Communication Commission of Kenya.
“We summoned him on Thursday and we have taken statements from him. He is under arrest for violating sections 26, 29 and 30 of the Act,” said Nairobi CID boss, Nicholas Kamwende.
The blogger is expected to be arraigned in court today.
This is not the first time the controversial blogger has courted problems. A few months back, another blogger, Dennis Itumbi, threatened to sue Alai for linking him to some ICC documents the former was arrested for. Just recently, Miguna Miguna also threatened to sue him for distributing his Sh 3300 book ‘Peeling Back The Mask’ in pdf format, free of charge to his thousands of twitter followers.
Robert Alai runs a technology blog techmtaa.com , but it’s his twitter presence that is felt most. He boasts of over 20,000 followers majority of whom depend on him for constant activity on their timeline. His frequent tweets, mostly break news before several media houses and for that, he has been regarded by some as a ‘one man media house’.
© nairobiwire.com
Margaret Wanjiru: No Beef Between Me And Ida And I’m Not Leaving ODM < Previous
Michuki’s Widow Dies At Nairobi Hospital Next >
Recommended stories you may like: