Margaret Wanjiru: No Beef Between Me And Ida And I’m Not Leaving ODM 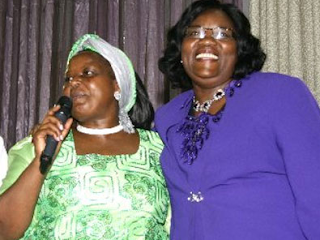 Starehe mp, Margaret Wanjiru has denied claims spread by a local newspaper and taken up by various blogs that she was about to decamp from ODM.
For some time now, the Star newspaper has been writing that Wanjiru, together with another female mp, speculated to be Rachel Shebesh, were no longer comfortable in ODM and it was only a matter of time before they left. It was reported that there were disagreement between them and Ida Odinga, who has for some time now taken a front row in the prime minister’s campaign.
Yesterday, the housing assistant minister denied the claims and said they were just rumours out to mislead ODM supporters.
Wanjiru dismissed claims that she had gone to South Africa to ‘meditate’ and plot her departure from the Orange party. It had also been reported that she told Raila to either promote her to full minister and name her his running mate, or she decamps.
“There are people working hard to get Central and Rift Valley out of ODM. They are trying to fuel seeds of discontent. If they did not manage to bring me down in 2010 they will not now,” she said during a meeting of Nairobi ODM women leaders.
In the same meeting, Ida Odinga denied having any disagreements with Wanjiru and other ODM reloaded members.
© nairobiwire.com
Minister’s Son Stabs His Lesbian Girlfriend At USIU After Shocking Revelations < Previous
Twitter Goes Silent As Robert Alai Is Arrested Next >
Recommended stories you may like: