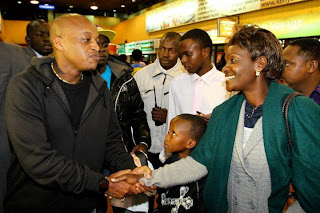 Kenya’s representative to the Big Brother, Prezzo, arrived in the country this morning after a very successful stay in South Africa. Prezzo emerged first runners up, losing the money to South Africa’s Keagan.
Speaking at the airport immediately after his arrival, Prezzo rubbished claims that there was any beef between him and fellow housemates Alex, who happened to nominate him twice. He also said that he would be ready to work with him.
“I heard that he was interested in working with me which is okay with me. I do not hold anything against him,”  he said
Asked about his intent to join politics, the rapper refused to rule out anything. “I’m down for whatever as long as it puts food to the table” he replied.
Just before he was called upon to represent Kenya, Prezzo was part of the group of youths at the Limuru 2B meeting, raising suspicion that he was warming up to the political class.

His arrival at the airport was all hype, with everyone wanting to shake his hand. There were also many people wearing T Shirts labelled, Team Prezzo, a catch phrase that was used to campaign for the rapper during his time at Big Brother.
He is set to address the media tomorrow.
© nairobiwire.com
Maasai Man Finds Used Condom In His Coca Cola Soda < Previous
Prezzo’s Grand Entrance At JKIA In Pictures Next >
Recommended stories you may like: