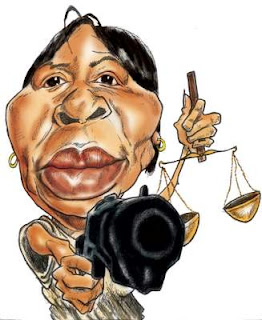 Nancy Baraza was yesterday given 10 days to either appeal the decision to kick her out of the judiciary, or to pack her luggage and leave. This is after the tribunal appointed by the president to investigate her conduct found her guilty of harassing Rebecca Kerubo, a security guard at the village market. Earlier this year, the Star newspaper broke the story and it soon became a matter of national interest. Baraza had pinched Kerubo’s nose and told her to know people. She was also accused of threatening to shoot her with her pistol.
A few days later, she was suspended and a tribunal set up to investigate her conduct. During the course of the hearing, Kerubo’s lawyers were locked out of the premises raising suspicion of an unfair hearing. However, it was a sigh of relief for Kerubo and her lawyers after the tribunal found Baraza guilty and recommended her expulsion from the judiciary.
It is now emerging that Baraza tried to compromise Kerubo by offering her large amounts of money to withdraw some of her testimony.
The tribunal found out that Baraza was in constant contact with Baraza, one week before the tribunal was to begin its hearings. At this point, Baraza had already been served with a list of witnesses. In her own admission, Baraza said she gave Kerubo and another guard Sh 5000 and Sh 2000 respectively, after they went to her home and later demanded fare. She however said that that was not a bribe. The former Deputy Chief Justice told the tribunal that Kerubo, her husband and her lawyer, demanded Sh 10 million settlement, which they later scaled down to Sh 4 million.
Kerubo’s husband told the tribunal that when they went to Baraza’s home, she offered them Sh 3.5 million to settle the matter, but they refused to take it. Baraza denied this allegations however. She was also accused of trying to convince Kerubo to withdraw her claim that she had brandished a gun and threatened to shoot her.
The tribunal found Baraza’s testimony inconsistent while Kerubo’s remained the same. That’s why they found her guilty. She now has 10 days to appeal the decision.
© nairobiwire.com
Nonini Joins Crowded Maina And King’ang’i Time Slot At One FM < Previous
Maasai Man Finds Used Condom In His Coca Cola Soda Next >
Recommended stories you may like: