“If Michelle Morgan says Kenya Power rates will go up by 16% next month, ni sawa ..” 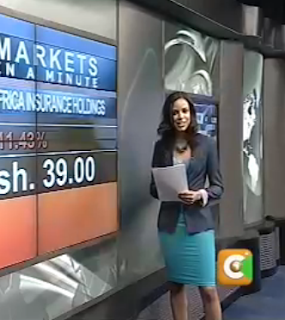 If you missed Michelle Morgan for the second day running, you can only blame yourself, not after all the hype she generated on Monday night and the whole day Tuesday. Citizen TV’s newest presenter is making business news irresistible.
When it was almost business time, anticipation had started building on social media. People, especially those who missed her on Monday, were eager to welcome her to their sitting rooms. As soon as she stepped in, tens of tweets with her name were being made every few seconds. (Even nairobiwire.com experienced a few minutes of traffic boom after everyone consulted Google and was in turn directed to this post we wrote about her yesterday.) Most of those tweeting were still in awe. Not even Jeff Koinange could not resist watching Citizen news. This is what he tweeted immediately Citizen Business was over.

Now that you’ve all had your ‘fill’ of Michelle Morgan on Citizen, switch back to THE BENCH at 10:30pm and catch Garsen MP,Garsen Mungatana!

Gosh someone tell me what Michelle Morgan does I missed:(

During the course of the night, it emerged that the ‘Morgan’ in Michelle Morgan is the same ‘Morgan’ in Bob Morgan Security better known as BM security and as the joke went, if you are planning to stalk her, it might help knowing that he mum owns BM security.
There were also several other joke here and there about Michelle. Here are a few.

Married men were ogling at Michelle Morgan as their wives were in the bedroom changing into their ‘Uhuru na Kazi’ tees
With names like James smart,Michelle Morgan & Eric Latiff on our tvs, no kid will allow me name him Omondi
But having Michelle Morgan come after Belinda Obura is a ploy to get us deaf first the former doesn’t have to try!
Michelle Morgan s’ mucus tastes like raspberry jello
Michelle Morgan hususu Delmonte appleberry flavour
Michelle Morgan farts mint flavoured sheesha
amebadilisha tl from #Mombasa riots to #sexy business news
If Michelle Morgan says Kenya Power rates will go up by 16% next month, ni sawa

© nairobiwire.com
It’s Time To Boycott DSTV And Join Zuku And Startimes < Previous
Campus Divas For Rich Men Next >
Recommended stories you may like: