Arsenal Invites Rudisha To The Emirates

Rudisha And Mo Farah Invited For Arsenal Opener At The Emirates. 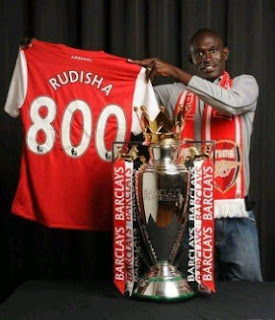 Olympic 800m gold medalist, David Rudisha has landed an invite to watch Arsenal in action against Sunderland on their season opener. 5,000 and 10,000 gold medalist, Mohammed Farah, popularly known as Mo Farah, has also been invited for the game.
Rudisha and Farah were two of the main highlights of the just concluded Olympic games. Both won their races in style stealing some limelight from Jamaican Usain Bolt. The reason they received the invites however, is because they are ardent Arsenal supporters, so reports the Telegraph.
Both have however not confirmed their attendance. Mo Farah’s wife is heavily pregnant with twins, while Rudisha could not be reached.
Arsenal’s move to invite Olympic stars can be interpreted as a counter to Manchester United, who have Usain Bolt as one of their biggest supporters. Having two great field athletes on their side, can help improve their image as a club.
© nairobiwire.com
Murang’a Man Brings Home A MOMO :-) < Previous
They Are Saying Raila Never Finished Primary School…and other stories Next >
Recommended stories you may like: