They Are Saying Raila Never Finished Primary School…and other stories

Ndhiwa ODM By-election Candidate Stabs Raila On The Back 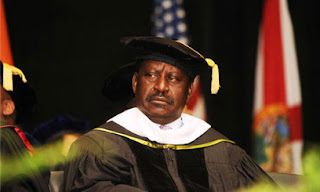 The courts have been handed another major test in the run up to next year’s general election. 8 petitioners want the Independent and Boundaries Commission to permanently bar 5 presidential aspirants from contending for the top seat.Two of the candidates (Uhuru and Ruto), already have a case in court.
The other three are :
Raila Odinga
Musalia Mudavadi

Kalonzo Musyoka
The activists have dug up the past dirt of each candidate and believe their case is tight. The three will now find themselves in similar grounds as Uhuru and Ruto whose case to determine whether they should vie is in court.
Prime minister Raila Odinga’s dirt, according to the activists is a lot. For the first time, his education credentials will be interrogated in an official setting. The activists claim he did not complete his primary school studies and therefore any education after that should be nullified. They say his studies in Europe should also be investigated. His University lecturer stint at UON is also brought into question.
“One of the main reasons for joining the Prime Minister is taking a job as a lecturer at the University of Nairobi with questionable academic qualifications and credentials,”read the paper filed in court.
Reason two why the Raila’s candidacy should be barred according to the activists, is his contribution to the Post Election Violence. They say he must have participated whether directly or indirectly.
Their third reason is Raila’s participation in the 1982 attempted coup.
The never ending molasses question is also brought up. According to them, Raila duped the public into contributing lots of money on the promise that they were buying shares.
The premier is also accused of nepotism.
Incidentally, one of the activists accusing Raila of all this is Augustino Neto, the just nominated ODM flag bearer for Ndhiwa constituency by election.
Vice president Kalonzo Musyoka’s “mr. clean” image is also brought into question. The VP is accused of:
* Using his office to acquire radio frequencies for a company owned by his wife and son.
* Illegal sale of the Somalia Embassy in Nairobi at a throw away price.
* Using his office to steal squatters land at Masangoleni Settlement Scheme.
* Using his office to steal National Youth Service land in Yatta.
* Found guilty of fraudulent land transactions in 1990 but failed to serve sentence.
* Serving as director of Access Insurance Company, which collapsed with policy holders’ millions
Mudavadi’s alleged dirt is as follows:
* Giving a helping hand to facilitate the post election violence.
* Failing to declare his wealth as required by the law.
* Committing perjury during the Goldenberg commission of inquiry.
* Grabbed City Council of Nairobi’s land at Woodley estate.
* Presided over mass loss of land at City Council of Nairobi, while seving as Local Government  minister
The hearing is scheduled for September 27.
© nairobiwire.com
Arsenal Invites Rudisha To The Emirates < Previous
Why Kenya Is Not Moving Foward. Leaked Conversation Between Kibaki And Raila Next >
Recommended stories you may like: