“They had never seen Raila cry before. We looked at each other, unable to move.” 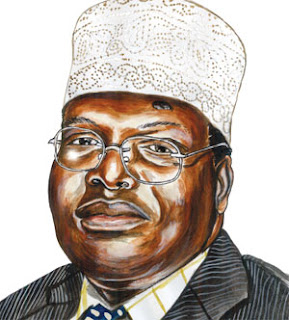 Peeling Back The Mask by Miguna Miguna is probably the most anticipated book in Kenya’s history. It is a book that promises to expose the happenings in circles of powers from an insiders point of view. Miguna has already built a lot of hype and Kenyans are definitely expecting something major. The former adviser to Raila had stated that chief justice Willy Mutunga would be the chief guest at the launch but the CJ has since declined the invitation.
A week before the 500 page hard cover book is launched, more details are emerging of what to expect from it. At one point, Miguna recounts his first time to see Raila cry. Here is an excerpt from the book.

“Eeeeh…eehhhh..eiiii…Please save me from Kibaki! Eeeeeh..eiiiii…Please don’t let me go back to that man…I don’t want to go back to Kibaki! Eeeeh…eiii…Please save me from Kibaki!” Raila broke down and cried, torrents of tears flowing freely down his cheeks.
He was shaking uncontrollably. It was about 3:30pm on April 6, 2008. Everyone in the room was stunned.
They had never seen Raila cry before. We looked at each other, unable to move. No one was prepared for this heart-wrenching scene.  I guess we had assumed that Raila was ‘superhuman’.
He had a larger-than-life image in the consciousness of Kenyans…But there he was, someone we all held in awe, wailing uncontrollably in front of everyone…Raila had just returned from a face-to-face meeting with Kibaki over the formation of the grand coalition government following the signing of the National Accord and reconciliation agreement on February 28 2008.
By then he had attended various meetings and most had ended in stalemate or Raila’s capitulation. Raila’s debriefs…had become a routine in itself, with Raila repeating, “Kibaki can’t accept this” or “Kibaki is insisting on that” Raila was not only crying he was sweating profusely.

The book will be launched on July 14th at the Intercontinental Hotel, Nairobi. It will retail at Sh 3,300.
© nairobiwire.com
Are Police Covering Up Grenade Threat At Kibaki’s Function? < Previous
Man Battered By Nyeri Wife Ready To Marry Another Nyeri Wife. Next >
Recommended stories you may like: