Police in Nandi are pursing a United Republican Party activists after he disappeared with a gift presented to William Ruto during one of the political rallies in the county. The activist, who once stood for a civic seat but lost is said to have sneaked off with the heifer gift to his father’s home in Kapkangani location immediately after the end of the rally. 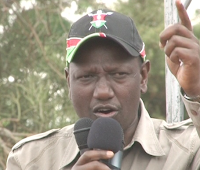 A search party which was also involved in the purchase of the animal retrieved it from the old man’s compound where it was tightly tethered in a secure corner awaiting to be taken to a yet to disclosed destination. Nandi central criminal investigation officer Samson Thoya confirmed that the police had received information that the activist had bolted with the gift heifer and were tracking him. Contacted on phone by one of the organizers of the rally, he admitted being in possession of the heifer but defended himself claiming he decided to keep it because he noticed that Kanu followers wanted to steal the animal.
During the rally, the activist also caused a fracas and was ejected from the meeting after he allegedly stole a cell phone at the VIP dais. Those who know the activist claim that he is a thief with irresistible desire to either defraud, pickpocket or forcibly acquire what his heart desires.
© citizen
After Nominating Prezzo, Kenya’s Alex Evicted From Big Brother. < Previous
Gor Mahia Fans Mutilating Tom Mboya Statue. [Primitive Energy] Next >
Recommended stories you may like: