By Ken   /   Wednesday, 18 Jul 2012 09:42PM   /   Leave a Comment
Miguna’s book is full of interesting stories. On one of the chapters, he is talking of some incident where he was meeting Raila at the Serena Hotel. After having some coffee, the bill amounted to Sh 11,000. Miguna writes that after they finished their discussions, Raila just stood up and left the room without even looking at the bill. He adds that it was not the first time the prime minister left his entourage with the bill.
Here is the excerpt. 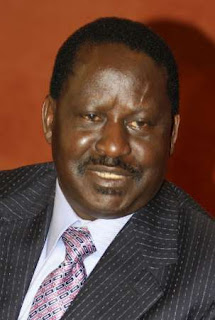 When the waiter came in with our bill and passed it over to Patrick, I suddenly realised that Raila had left us with an Sh11,000 debt, without even caring that I hadn’t been paid since July 26, 2011. Nor did it seem fair that Patrick, who as a genuine friend was only trying to help us, should be saddled with such a huge bill. But that is how Raila is; it was not the first time he had walked from a
restaurant, in my presence, without picking up the bill. He had once done that to me after asking that I arrange a small meeting with Prof. Oyugi, Oduor Ong’wen, Adhu Awiti and me at a restaurant Oduor Ong’wen and Prof. Oyugi owned in the Kilimani area of Nairobi.
After we had eaten a sumptuous meal of fish, beef, chicken, a variety of vegetables, and the drinks had flowed freely, amidst strategy and discussions, Raila had simply walked away, leaving us with a bill of more than Sh35,000. Even his drivers, bodyguards and a few hangers on that rushed to the place after learning of his presence, had eaten. We had pooled our resources and found most of the sum, but the owners must have had tight margins that month. A few months after that incident, I had accompanied Raila on a tour of Nyanza, with Orengo, Kajwang’, Oburu, Jakoyo and some of his usual office entourage.

We had flown on a Kenya Air force Force helicopter and landed in Kisumu around lunchtime. Upon arrival, Raila had asked us to join him for lunch at the Kisumu Yatch Club. Again, after a sumptuous meal with plenty of drinks on offer that the team, except yours truly, had partaken of the bill had been brought to me, and I had dutifully passed it over to Orengo. Seeing Orengo and I looking at the bill, Raila had asked us to pass it over to him. He had examine it closely and then asked for the manager. When the man had come, saying “yes sir, no sir,” Raila had reprimanded him harshly, stating that the bill wouldn’t be paid because we had been overcharged. The bill had been about Sh125,000.
It’s true the charges had seemed excessive. But then again, I didn’t know the price of the expensive looking bottles of champagne, wine and whisky that those around the table, except yours truly, had been drinking. I had also felt that we could and should simply have paid what we believed was a fair cost for the order. After all, the place was a going concern. The owners were there to make money,
and they had offered us good hospitality in exchange for our money. In any event, I believe that it was callous, insensitive and an abuse of power for Raila to have taken advantage of his position and undermined another Kenyan’s business.

© nairobiwire.com
Miguna To Sue Robert Alai For Distributing His Book In PDF Format. < Previous
Ugandan MPs To Launch Orange Democratic Movement (ODM) Next >
Recommended stories you may like: