“At first, Raila thought the old man was dressing up or using the washroom…” 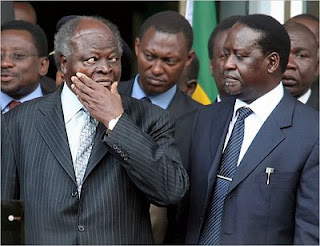 The most anticipated book in Kenyan history will be launched in a few days time. It is expected to reveal secrets that would have never seen the light of day. Starting today, Nation newspaper is serializing the book, titled, Peeling Back The Mask, a quest for justice in Kenya.
Contrary to popular belief, the book is not only targeting the Prime Minister but the entire government. It will however bend mostly in the direction of Raila, considering the office Miguna held.
Miguna provides details from 2009 Kilaguni retreat from an insider’s point of view. He says that the retreat, which was meant to iron out differences between the two coalition sides, started on the wrong foot after ODM realized that the PNU side of government had received special treatment. He writes that President Kibaki, Deputy Prime minister Uhuru Kenyatta and the late internal security minister Prof George Saitoti were allocated bigger rooms than the ODM trio of Prime minister, Raila Odinga, Deputy Prime minister Musalia Mudavadi and Deputy party leader William Ruto. This showed that the PNU side still regarded itself as superior, despite the ’50/50′ power agreement.
Miguna recounts how, after a meeting with Kibaki on the first night, Raila cracked their ribs with his description of what had transpired.

“According to Raila – and we believed him – Kibaki spoke with him from behind the curtains, which were fully drawn. They didn’t see each other. There was no face-to-face meeting as such.

“At first, Raila thought the old man was dressing up or using the washroom and that he would join him in the spacious living room. However, after 30 minutes of odd ‘communication’ Raila politely excused himself and left.”

The next day, disagreements would continue. Questions ODM wanted settled included who was senior between Kalonzo and Raila. However, there was no clear agenda, which PNU insisted should be drawn in a face to face meeting between Kibaki and Raila. ODM was against this because they knew Raila to be a ‘disastrous negotiator’ often “unstructured” and overawed by Mr Kibaki in one-on-one settings.

After it became clear they were heading no where, Kibaki “skulked out” without making eye contact with anyone. The meeting collapsed and both sides hurried to craft press statements exempting their side from any blame.

Report by Nation. Additional reporting by Nairobi Wire
Are Prezzo’s Days At BBA Coming To An End? A Look At How Africa Voted. < Previous
Letter Anyang Nyong’o Sent Atwoli Demanding Written Apology. Next >
Recommended stories you may like: