He Blames Emmanuel Juma and Joe Ageyo For Giving Him Wrong Information, which led to one of the biggest gaffes by a media house in Kenya. 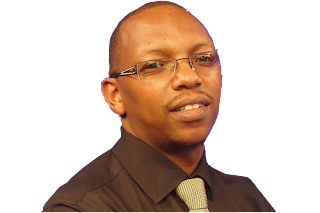 On February 4th this year, Kenyans on Facebook and Twitter were the first to be informed of the death of Njenga Karume (RIP). The NTV Facebook page informed its fans that the veteran politician was no longer among us. 30 minutes later, that post was deleted and an apology issued. NTV announced that Karume was still alive and kicking. By then, their sister station Qfm had picked up the story and announced it to the world. Meanwhile, someone was updating Karume’s Wikipedia page. Several celebrities also sent their messages of condolence.
This was the apology they issued then.

On the very same day, NTV suspended journalist, Albert Gachiri, pending further ‘investigations’. It had been claimed that the media house sacked him but in a blog post written this Thursday, Gachiri said he tendered his resignation the same afternoon.
It later emerged that Albert Gachiri had updated what he was told by his superiors Emmanuel Juma and Joe Ageyo. The night before the fateful morning, Albert Gachiri received a call from Senior editor, Emmanuel Juma informing him of the demise of Njenga Karume. Joe Ageyo would later call confirming the same. Being the editor on duty the following morning, Gachiri was tasked with updating NTV’s Facebook ‘status’. He went ahead and relayed the information he had been given. 30 minutes later, the status was deleted and an apology issued.
In a post on his personal blog, Albert Gachiri has finally broken the silence on what really transpired. He is angry that his colleagues failed to come to his rescue yet they were the originators of the story. He adds that Emmanuel Juma and Joe Ageyo found out that Karume was still alive by morning, yet did not inform him.
He writes,

“To make matters worse, I have reasons to believe that my seniors had already been made aware that the Cabinet minister in question was then still alive, by the following morning. But none of them thought it wise to call me, to at least negate the discussion we had had the previous night.”

He was particularly upset by the suspension letter, which he saw as a “prolonged pain from the apparent denial of fairness or justice”. That’s why he chose to resign.
The reporter was however in luck because days later, he had found a new job at CCTV.
Despite stating that he holds no grudges, Gachiri is not a happy man, especially after the Media Council of Kenya, in a periodical magazine, used his  example to show the extent of irresponsible journalism. He claims that MCK did not even bother to collect the basic facts.
© nairobiwire.com
40 plus "Fear Of ‘s" You will Find Hilarious. (HUMOUR) < Previous
Kenya’s Malonza Evicted From BBA. Next >
Recommended stories you may like: