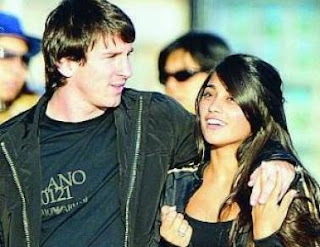 When you mention the name Lionel Messi, what comes into mind is the picture of a diminutive, talented footballer who has mesmerized many with his dazzling skills on the pitch. The 23 year old football ace has broken a number of records and set others in equal proportion.

However the Argentine sensation could have literally ‘scored’ in matters unrelated to football and could become a father soon.
Since returning to Argentina, the Barcelona star has been faced with questions over whether his girlfriend Antonella Roccuzzo is pregnant – a question he appeared to answer when he celebrated a goal by putting the ball up his shirt and signaling to the crowd against Ecuador.
The Barcelona ace generally keeps a low profile and avoids the gossip pages back in Europe with regards to his private life.
However, as Argentina’s biggest star, Messi couldn’t help but bask in the limelight.

The diminutive forward was caught on the hop at a press conference earlier this week when a South American journalist appeared to suggest to Messi that he knew Roccuzzo-his girlfriend, was expecting.
And while, at the time, Messi appeared distracted before eventually regaining his composure – now, gossip magazines throughout Argentina are convinced he is expecting his first child.

Messi fuelled the speculations further during a South American World Cup qualifying fixture against Ecuador, which ended 4-0 to the hosts.
Messi picked up the ball to celebrate a goal by Man City striker, Aguero, by putting it under his shirt, apparently gesturing a pregnant belly.
He then gestured to the crowd – where his girlfriend was in attendance.
The act has got people talking across the footballing sphere – especially in South Americans, but only time will tell.
© Obed Nyakundi (The Kenyan DAILY POST)

XYZ Show Is Back.. Every Sunday on Kiss TV. < Previous
Osama Donated All His Money For The 1998 Nairobi Bombing. Next >
Recommended stories you may like: