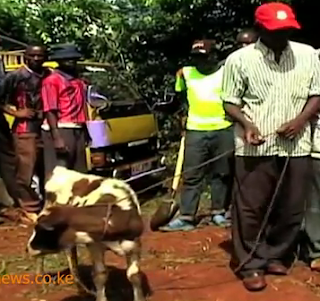 Kenya was last night treated to a bizzare incident when villagers in Maragua constituency, Murang’a county, inhumanely buried an 8 month old calf alive. They said they were fulfilling the wishes of their dead kin. The family had refused to pay the dowry in full during the dead kins lifetime and they had to do so while he was dead, and they did it in the most bizzare way.

The dead man, Elisha Mugucia, allegedly made a threat in his last days. Apparently, the man said that if he was not given the customary cow required for dowry, in his lifetime, then wherever he was buried, the cow would be buried with him. His sister was the one supposed to pay the dowry since traditionally, in the absence of the father of the house, the first born son receives the payment. Elisha was the first born.
The family that claims to be of christian background, resisted opposition from authorities and went ahead to murder an innocent calf the worst way possible.
I think its time our animal rights activists speak up. It would have been better if the calf was first slaughtered.
If you missed the video, here you go.
© nairobiwire.com
Jaguar Has A New Toy, Its Big, White And Yes, Its A Range. < Previous
KDF Finally Attacks Kismayu. Next >
Recommended stories you may like: