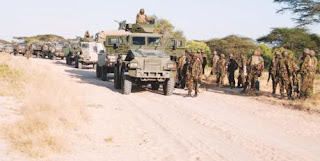 Unconfirmed reports say that Kenya Defense Forces have finally attacked Kismayu. Intelligence briefs is reporting that Kismayo has been shelled by Kenyan fighter jets and helicopter gunships. KDF is said to be using everything at its disposal to capture Kismayu from Al Shabaab.

The army, navy and airforce are all involved in what is probably the most anticipated moment of operation ‘Linda Nchi’.
As is typical of KDF, they have not said a word yet, perhaps waiting till the conquer, as it happened in Afmadhow. Intelligencebriefs.com is also reporting that Al shabaab has blocked all exits from Kismayu thus trapping the residents inside. This strategy works in slowing down KDF and possibly having human shields for themselves. Should KDF indiscriminately attack, they could be accused of war crimes and suffer more funding cuts as it happened recently when US senate proposed a cut in donations to Kenyan military.
©intelligencebriefs.com/nairobiwire.com
Villagers Bury Cow Alive In Maragua. Foolishness or Tradition? < Previous
Kim Kardashian Buys Kanye Rare Lamborghini Worth $750,000 Next >
Recommended stories you may like: