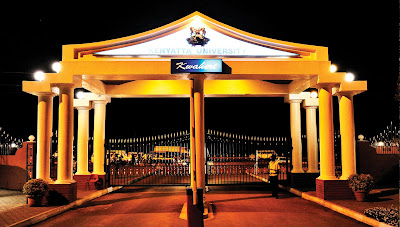 A student at Kenyatta University was today hit by a train inside the school compound. The accident occurred at 6:30 am. Kenyatta University known for its vast piece of land boasts of a railway line running through its compound. The line effectively separates the hostels from the rest of the university.
It is said that the student was waiting for the train to pass so she can cross to the other side but she made the mistake of standing very close to the track. As the train was passing she was ‘pulled’ and hence the impact. She however survived the impact but by the time the ambulance was arriving at the scene, she had already died.
© nairobiwire.com
BBA’s DKB Set To Be Kicked Out After Slapping Zainab. < Previous
Evra Wipes His Behind With Teammate’s Shirt.(VIDEO) Next >
Recommended stories you may like: