Evra Wipes His Behind With Teammate’s Shirt.(VIDEO)

Evra Causes A Stink In France 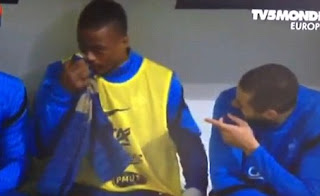 Manchester United captain Patrice Evra was caught on camera wiping his buttocks with a teammates t shirt. He then went ahead and sniffed it. It was during a friendly game between France and Serbia. His actions have been criticized.
‘It was disgusting! But this gesture shows above all a real lack of respect towards the blue of France and all that it stands for,’ said Paris magazine Le 10 Sport.
‘We struggle to imagine Evra doing the same with the Manchester United shirt.’
Evra is no stranger to controversy.Two years ago, Evra came under fire when he led a players strike in South Africa, during the world cup.
Here is the video.
© nairobiwire.com
Train Hits And Kills Student Inside Kenyatta University. < Previous
Jose Chameleon Buys New Range Rover. Next >
Recommended stories you may like: