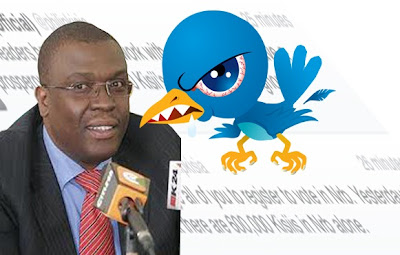 Phillip Kisia was today forced to delete two tweets which were seen to be perpetuating tribalism. The former Nairobi town clerk and now a candidate for Nairobi governor came under heavy criticism from fellow tweeps after word spread that he had written something showing his strategy of using the Kisii numbers in Nairobi to win the governorship.
He tweeted, ” I would like to urge all of you to register to vote in Nairobi. Yesterday I found out there are 600,000 Kisii’s in Nrb alone.”
His statement was interpreted to show how he is planning on playing his tribal mathematics. As one of the leaders thought to have fresh ideas and ideals, his tweet was not taken lightly. Some of the biggest names in Kenyan twitter community including: @coldtusker and @xyzshow accused him of not being any different from the old breed of politicians.
Kisia was forced to eat a humble pie when it became too much. He deleted his tweets and apologized. A snapshot of the tweets had already been taken however.