When the manhole was opened, they disappeared. 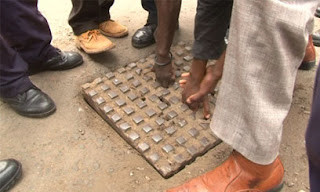 Nairobi residents were treated to rare drama when some men started calling for help from an underground sewer along Mama Ngina Street. At around midday, some people reported hearing calls for help from the tunnel and soon a crowd of people gathered.

“I was just walking and then I heard someone calling for help from this sewerage.  So people asked him ‘where are you’ and he answered ‘I am inside this sewage tank help me’. When we tried to help he disappeared. It was at around 12.10pm,” a witness told Capital FM.
City council askaris arrived at the scene but for some time could do nothing but watch as they did not have necessary tools. Witnesses say that the men speaking from below were shifting from one manhole to another hoping that they will he pulled out. However, when one of the manholes was finally opened, they were nowhere to be found.
Coming in the wake of renewed terror threats, residents were quick to point out that they did not feel safe, especially because the sewer line is connected to some of the skyscrapers Alshabaab is allegedly targeting.
“You can’t know what plan these people have when they are in this sewer line.  We don’t know what they are up to. We cannot feel safe… in fact, I m going home now,”a witness said. “It is dangerous given the state (of terror threats) we are in. this is busy place.  The government should tell us whether we are safe or not. People are underground!  The government should address us,” he added.
Perhaps our bomb experts should get down there and do a thorough check.
© nairobiwire.com
Oil Money Starts Flowing. Turkana MP Buys Range Rover. < Previous
Jaguar Has A New Toy, Its Big, White And Yes, Its A Range. Next >
Recommended stories you may like: