Ex-wife says Mutunga pulled off her oxygen mask in an attempt to kill her. 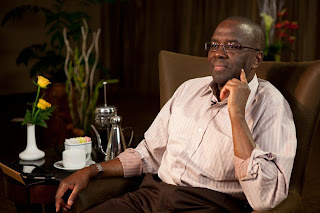 Chief justice Willy Mutunga divorce case will now be heard on June 28th after it failed to take place yesterday. This was after the court was notified that the CJ’s ex wife was out of the country. Mutunga accuses his former wife, Prof Beverle Michele Lax of physical, verbal and intellectual abuse.
“The Respondent is a person of ungoverned temper and on various occasions during the course of the marriage, the Respondent has physically and verbally assaulted the Petitioner,” says Mutunga
He particularly accuses her of tearing apart his thesis in 2003, despite knowing clearly it was his only copy.
“Some time in year 2003, the respondent knowing fully well of that the petitioner had only one copy of his LLM thesis, tore it up, mutilated, and  destroyed that single bound copy thesis,” Mutunga‘s petition states adding the act was intended to cause him maximum psychological, emotional and intellectual pain.
Lax, on her part accuses Mutunga of being a pathological liar.
The two got married on July 20, 2000 in San Mateo California.  Mutunga alleges that Lax at one point accused him of wanting her dead when she underwent surgery at Stanford University Medical School, despite the fact that he was at her bed side for 5 days.
Lax also “falsely and maliciously alleged” that “in an attempt to murder her during her hospitalization, he pulled off her oxygen mask while she was in hospital, causing her to pass out after her surgery, knowing full well that she passed out due to her allergy to the drugs administered by the attending physicians. Indeed the Petitioner was overcome by grief during the incident prompting an attending nurse to lead him out of the ward”.
© nairobiwire.com
Peter Kenneth And Jeff Koinange Got Beef. < Previous
Brenda Wairimu Dumps Juliani?? Next >
Recommended stories you may like: