Has Mzalendo Kibunjia Slept On His Job For Too Long? 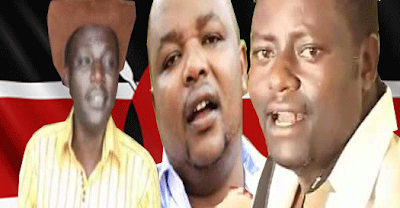 Popular Kikuyu musicians, Kamande wa Kioi, Muigai wa Njoroge and John Demathew have come under scathing attack from Kenyans on social media and several bloggers after an article by a blogger calling himself moderate kenyan highlighted the vast tribalism, hate and incitement in some of their songs. The musicians are accused of spreading hate against Raila while proclaiming Uhuru to be the anointed one. The wording of the songs is said to be exactly what Mzalendo Kibunjia should be looking for.
Here are some of the translated words from the said music. Some of the suspect words are written in bold.
Uhuru ni Witu (Uhuru is Ours) – Kamande wa Kioi
Greetings people of the house of Gikuyu and Mumbi. I bring you a message from all Kikuyu musicians. This is a message from God. Uhuru is Moses meant to move Kikuyu from Egypt to Canaan. Lets all vote for him undivided. He is ours. He is anointed by God, poured oil on.
Raila, there is a call. Go to Mama Ngina’s house, a king has been born there. Once there ask where Uhuru is seated and pour oil on him. Just like Samuel did for David in the Bible. Stop chasing the wind Agwambo, go to Icaweri and anoint Uhuru.
You thump your chest about Hague, is Hague your mother’s? There is a curse from God. Philistines who do not circumcise cannot lead Israel. When Abraham stressed God, he was told to go get cut, even you General of Migingo, your knife is being sharpened.
Link to the song HERE
Hague Bound – Muigai Wa Njoroge and Muhiko
This may pass as the most inciting song. It is in form of Q and A, with Muhiko asking the question and Muigai wa Njoroge answering.
Question: If it was you who is being pushed to The Hague what would you do?
Answer: I would call my family and divide up my property and then ask my mother to pray for me.
Question: What if you knew that Hague you are being pushed there by an uncircumcised man who wants to push you there and take over your wife and all your wealth? A man who can do anything to ensure you are in problems.
Answer: There it is better to die. Things for a man are not governed by an uncircumcised man. I would kill him. Its better they increase my charges.
Question: What would you tell your crying supporters as you are being shipped to Hague?
Answer: I would tell them to pray for me and know I am being persecuted for my love of my community.
Question: When you get to Hague how you would ensure the white man does not cheat you?
Answer: I would ask for proceedings to be done in Kikuyu.
Question: When on the dock what would you be thinking of the uncircumcised man who is the source of your predicament?
Answer: I would ask God to forgive him. I would also ask that he gets circumcised so that he matures mentally. I would also ask Kenyans to be very wary of that man.
Link to song HERE
Mwaka wa hiti (The year of the hyena) – Demathew
Translated and explained snippets:
As Demathew I prophesize and let the stones hear me if men wont.
It is now the year of the hyena. Who will teach you and your ears are blocked?
When a man is seated he sees further than a boy on top of a tree.
You are like a greedy hyena seeing a man walk and following him hoping that his arm will drop off. You follow him till he boards the train and the arm does not drop and you never eat. (A reference to all that may benefit from ICC)
Before Jesus was crucified He stood in the court Judge Pilato and he answered all questions, Judge Pilato said Jesus is free but the crowd asked that a thief be freed instead. (ICC will show Uhuru’s innocence)
Where are you (Peter Kenneth) from? If you were one of us, you would be pained by the people burnt in Kiambaa church. My brother lost his property in Kisumu, how can you tell us he (Raila) is our community’s friend.
Father (Jomo Kenyatta) I feel sad when I see your son (Uhuru) being persecuted by men of ill-will and a woman (Martha Karua) is carrying their bags.
In-law (Kalonzo) things are not going well for you now. You are clueless and your matters are now being discussed by women in the market. But I still remember how you saved me (after 2007 elections) when leopards had attacked me.
Link to song HERE
It’s clear that the views of the songs do not represent the views of the Kikuyu community. Reading through comments on Youtube, you will see that Kikuyus, who understand the lyrics, actually disapprove them.
Here are two comments from Muigai’s song.
Well….well.Andu aitu.This is hate mongering exactly as it all started in 2007.I thought we kikuyus learnt our lessons in 2007 that we are not superior to other kenyans purely because of that minor oparation down below.Good lyrics if i didnt understood the words.
Muigai witu….you﻿ could have done better.

hater song, kikuyus we need to realize that other communities have a right to live the way they deem right.hope one day kenyans﻿ we shall see ourselves as one community!! tutige rumena, na ucogothi


Nairobiwire.com urges all artistes, especially the vernacular ones to exercise caution when composing music. Their position of influence when abused can return Kenya where it was in 2008.

Kenya Airways Refunds Passenger For Flying Next To Dead Man. < Previous
Remember DECI (Pyramid Scheme), Its Founder Is Dead. Next >
Recommended stories you may like: