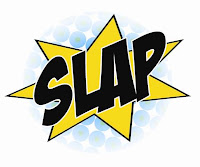 This video recorded in an unidentified part of Africa shows what can be summarized as a slap galore. A man sitting on a rock receives the first slap which leads him to the ground. What follows is a string of powerful slaps on his face. Many slaps later, he is able to stand up and its his turn to give out slaps.. Just hilarious.

© nairobiwire.com
Osama Donated All His Money For The 1998 Nairobi Bombing. < Previous
BBA’s DKB Set To Be Kicked Out After Slapping Zainab. Next >
Recommended stories you may like: