Mohammed Ali And Dennis Onsarigo Do It Again. 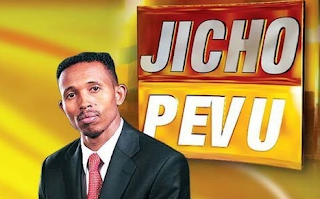 It was trending on both Twitter and Facebook, minutes after it was aired. The build up was also superb and people are still talking about it. Mohammed Ali and Dennis Onsarigo once again provided Kenyans with a mouth watering investigative piece. It provides a link between powerful individuals, statehouse ,the infamous Artur brothers and the multi billion drug overhaul at the coast.
On its official Facebook page, Jicho Pevu claimed that the police were aware that Mohammed Ali was working on something big, but had no clue what it entailed. They also said that Mohammed Ali was accused of stealing a phone as part of the operation to derail his work. Here is the video of the English version, ‘The Untouchables’, by Dennis Onsarigo, as provided by KTN.
Watch part two.
© nairobiwire.com
Are You Ready For Miguna’s Book? < Previous
Mombasa To Sink In The Next 50 Years. Next >
Recommended stories you may like: