Her status changed. She was no longer the simple girl-No! She was a girl of class flowing with mullah. 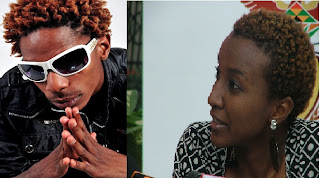 Recently on NTV’s Teen Republic, Eric Omondi revived a forgotten affair between him and Valerie Kimani.  Yes! The two were a couple! Apparently, when the comedian was a 1st year at the Daystar University, his eyes were set on the artist.


Teen republic is a show hosted by Anita and Antoneosoul every Saturday at 11-1 p.m. On the segment of teen celeb interview, Anita probed Omondi to reveal what went down between the two.

Openly, Omondi revealed that he had been spending sleepless nights strategizing ways of ‘katiaring’the singer.  We got more insight from a mutual friend of the two.
Apparently, Valerie was reluctant and did not want anything to do with him at first. This is maybe due to his skinny frame/ interesting looks. Valerie was then a beautiful young girl quite popular to the boys in campus. Eric – a class crown.
However, Eric outdid himself as he made her laugh all the time. Kimani grew a soft spot for Omondi and started listening to him and paying him attention. Eric worked harder and soon-he was Valerie’s new bff.
Their co-curricular activity was walking in Campus together and spending time enjoying themselves. A relationship started brewing between them. Fellow students in the University dubbed them as the ‘cute couple’. …until, the bomb shell dropped.
Valarie went to Tusker Project Fame. She outdid herself flirting with the likes of Alvan Gatitu. Eric was back at home cheering on his lover. He begged for his friends to vote for her and this finally paid off. She scooped the first position whisking the millions.  Her status changed. She was no longer the simple girl-No! She was a girl of class flowing with mullah.
Val started keeping off Omondi. She sidelined him claiming that she was hanging out with people who could mentor her in music – the likes of Eric Wainaina. Omondi was left, single, frustrated and lonely.
Rumour has it that he avenged to outdo himself and used his wit to create a name for himself. Good enough, Churchill spotted him and pap! He made himself a name. Today, Omondi has more following and fame than Valerie Kimani. Money comes easy and making friends is a piece of cake.
What goes around comes around.

Jimmy Gait ‘Ole’ Video Is Out.. Whats With The Naija Accent. < Previous
Kid Wakes Up High After Surgery Due To Anesthesia. (HILARIOUS VIDEO) Next >
Recommended stories you may like: