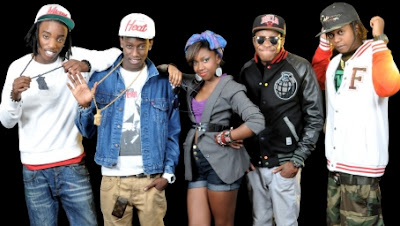 It looks like nobody is going to stop them.Right from entertaining big brother, our own Camp Mulla have received a historic nomination for the BET awards. Camp Mulla have been nominated for the best international act (Africa) alongside Lira from South Africa, Nigeria’s Wizkid and Ice Prince, Mali’s Mokobe and Ghana’s Sarkodie.
The 2012 BET awards will be hosted by none other than the guy who brought us snakes on a plane, Samuel L Jackson. The ceremony will go down on 1st July.
Being part of the BET means you will mingle with the likes of Jay Z, Kanye, Beyonce, Chris Brown and basically all the big artiste. This is a lifetime opportunity for upcoming acts and collabos can be secured during such events.
This year’s BET has Chris Brown and Nicki Minaj as confirmed performers but many more are expected to be included. The nominations are dominated by the trio of Jay Z, Kanye and Beyonce. Kanye leads with 7, Beyonce has 6 while Jay Z has 5. Last year’s biggest winner Chris Brown has 3 nominations.
Here is the list of the nominees.
Best International Act (Africa)
Camp Mulla – Kenya
Ice Price –  Nigeria
Lira- South Africa
Mokobe – Mali