Zuma To Say I DO. 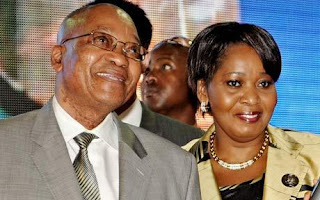 South Africa’s president Jacob Zuma, is set to marry his long-time fiancee and fourth wife, Bongi Ngema. Zuma, who just turned 70 will have his wedding coming weekend, his spokesman said.
“President Jacob Zuma will be formalizing his relationship with his fiancée by having a private traditional ceremony this coming weekend,” said Mac Maharaj.
Polygamous is the norm in Zulu culture and is legal in South Africa. Zuma is documented to have 21 children.

The other first ladies are Sizakele Zuma, Nompumelelo Ntuli-Zuma and Tobeka Madiba-Zuma. He was previously married to home affairs minister Nkosazana Dlamini-Zuma who he divorced in 1998, and then to Kate Mantsho-Zuma who committed suicide. All his wives have equal chances of accompanying Zuma on official functions. Ngema had the privilege to join him on a visit to France, even before becoming his lawfully wedded wife.

Zuma has a 3 year old son with Ngema.
© nairobiwire.com

Ugandan School Using A Bomb For A Bell. < Previous
100 Years Later, Facts You May Not Know About Titanic. Next >
Recommended stories you may like: