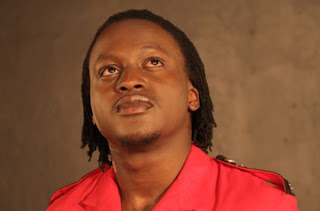 Tusker Project Fame Winner, Davis Ntare, spent Tuesday night at the Central Police Station, Nairobi and was released late Wednesday morning.He was arrested at the Tribeca pub in Nairobi’s CBD, for allegedly biting the thumb of a female patron, Maryanne Karanja. The singer was booked in the occurrence book under OB 4/18/04/12 according to the Star.
David who won the Tusker Project Fame on his second attempt, comes frequently to Kenya. His auditions for the second season were actually in Nairobi.

UPDATE:
Maryanne Karanja, the assaulted lady, is Machachari’s script writer, who happened to take snapshots of Davis being thrown out of Tribeca. Apparently, Davis got overwhelmed by one too many ‘fobe’ and jumped on stage, grabbing the mic from Fred Omondi. The bouncers could not have any of that and as the TPF winner was being thrown out, he spotted a nice lady taking photos. Thats when he bit her thumb. Maryanne has now sued Davis.