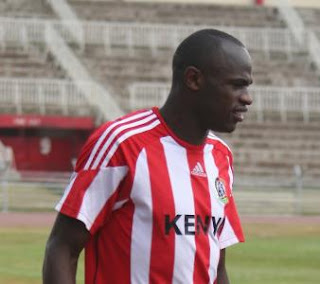 Days after Dennis Oliech announced his retirement from Kenya’s national team, Harambee Stars, it is emerging that he may be headed nowhere. FIFA has cracked the whip and are now threatening to sanction the Auxerre player. Oliech has been claiming he was not ‘consulted’ and duly paid for his image use on an East Africa Breweries Limited billboard advert.
FIFA’s Director of Legal Affairs, Marco Villiger, said in a statement that the player was eligible for disciplinary action if he snubbed national team call up.
“As a general rule, every player registered with a club is obliged to respond affirmatively when called up by the association he is eligible to represent on the basis of his nationality to play for one of its representative teams,” Villiger said in a statement on Wednesday.
“Violations of the provisions set forth in Annexe 1 of the FIFA rule may lead to the imposition of disciplinary measures.”
Just recently, Mariga had fallen out with Football Kenya, over unpaid air travel fares.
© nairobiwire.com
Gitobu Imanyara Photoshopped. < Previous
TPF’s Davis Ntare Arrested For biting Lady’s Finger. Next >
Recommended stories you may like:

PGA Championship: What to Expect This Year!

I Struggled to Breastfeed Until I Found a Lactation Powder That Works: Founder of Nurture – Mother’s Love

One on One With Actor Robert Agengo